PRESS RELEASE: Lyten Named One of the Top 10 New Battery Companies of 2022 by NAATBatt International 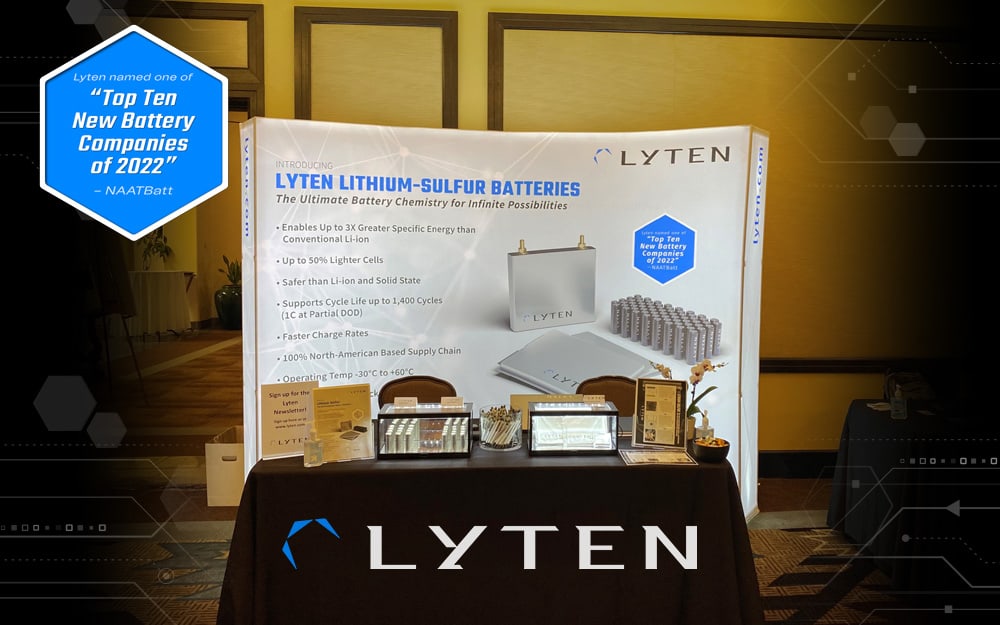 SAN JOSE, Calif., Feb. 10, 2022 /PRNewswire/ – Lyten, an advanced materials company, announced today it was selected as one of the Top 10 New Battery Companies of 2022 by NAATBatt International.

John Duke, Chief Business Officer at Lyten, was on-site at NAATBatt 2022, the 13th annual meeting and conference of NAATBatt International in Litchfield Park, Arizona, to accept the honor and to give a presentation about Lyten’s innovative LytCell™ lithium-sulfur (Li-S) batteries to conference attendees.

“It is an honor to be recognized by NAATBatt as one of the top 10 New Battery Companies,” said Duke.  “Lyten’s lithium-sulfur batteries represent a breakthrough in battery science and will be able to deliver up to three times the gravimetric energy density of conventional lithium-ion batteries.  With greatly improved power and safety, unmatched by Li-ion, our LytCell batteries will make a significant difference in the future of electrified transportation.”

NAATBatt International is an organization for supporting the development of the advanced battery industry and the battery supply chain in North America. In response to the announcement that Lyten was named a Top 10 New Battery Company, Dan Cook, CEO and Co-Founder of Lyten said, “We are proud to have been recognized by NAATBatt for our lithium-sulfur battery innovations. Because our lithium-sulfur batteries do not utilize cobalt or nickel, this will enable U.S. automotive manufacturers to greatly shorten their battery supply chain and provides them more control over their electric vehicle production.”

Lyten’s batteries, first publicly announced in September of 2021, will represent a clear advantage to competitive battery technologies. With the development of its three-dimensional graphene material – Lyten 3D Graphene™ – Lyten’s more powerful batteries are designed for automotive, aviation, and aerospace industries. LytCell™ batteries will perform better at both lower (-30) and higher (+60°C) temperatures than Li-ion, will be up to 50% lighter, have faster charge rates, and they are orders of magnitude safer than Lithium-ion.

Lyten is an advanced materials company developing a revolutionary lithium-sulfur battery technology for use in a variety of applications in automotive, aerospace, defense, and many other markets. Lyten 3D Graphene™ is the advanced material that enables lithium-sulfur batteries to improve the range and safety of electric vehicles, while also achieving a lower carbon footprint than other EV batteries. Lyten holds more than 260 issued or pending patents. Founded in 2015, the privately held company is based in San Jose, California. Visit www.lyten.com for more information.

NAATBatt is a not-for-profit trade association dedicated to promoting the commercial interests of its members by supporting developments in advanced battery technology consistent with the goals of enhancing energy efficiency, reducing petroleum dependence, and enabling carbon-free electricity generation. NAATBatt’s programs, committees and publications help its members increase their knowledge and grow their business in one of the most important industries of the 21st Century. For more information about NAATBatt and its programs and activities, go to: www.naatbatt.org.