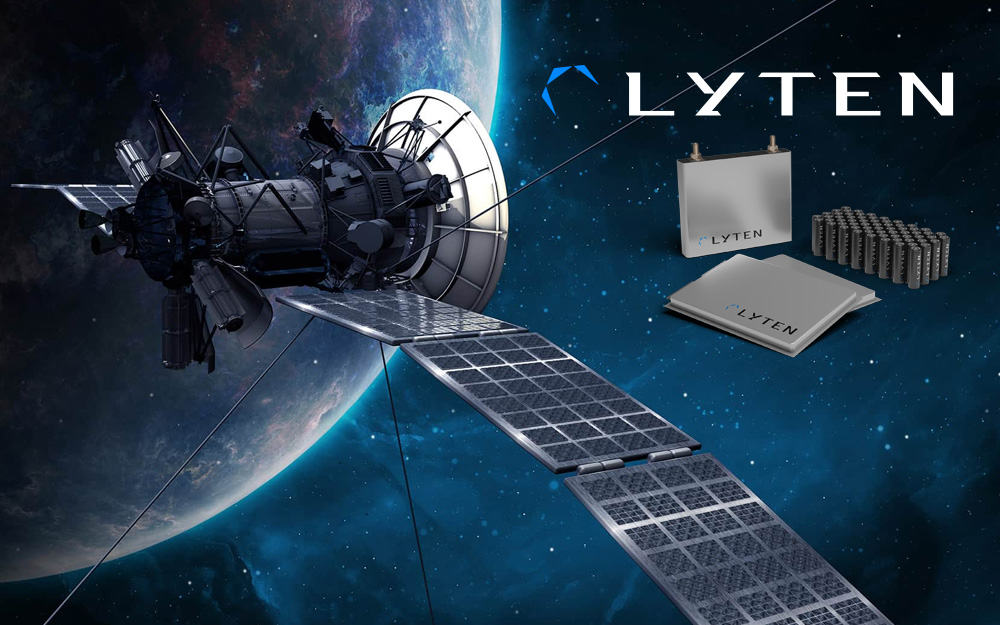 SAN JOSE, California, January 6, 2022 /PRNewswire/ – Lyten, an advanced materials company, announced today it secured a prototype Other Transaction (OT) agreement in support of the Defense Innovation Unit (DIU) around high-specific energy storage and management solutions. A core objective of the agreement is to demonstrate a lithium-sulfur (Li-S) battery solution that will significantly increase the duty cycle of small satellites for the U.S. Space Force, which is one of many applications for the new Li-S battery technology. The ultimate goal of the effort is to develop a lithium-sulfur rechargeable battery capable of 3X, or three times, the energy storage capacity of current lithium-ion (Li-ion) batteries, enabling the use of higher duty cycle spacecraft and those that function longer during an eclipse.

Lyten has been developing and innovating its pristine, 3-dimensional graphene material that can be formulated and tuned at the molecular level and used to significantly improve batteries – among other applications. When formulated into its advanced Li-S battery chemistry, Lyten’s batteries deliver greater energy density, superior temperature performance, faster recharging time, and greatly improved safety.

“There are significant limitations with lithium-ion batteries, and we have successfully broken through those barriers with our extensive research and development efforts and with our collaboration with the DIU and the U.S. Space Force,” said Dan Cook, CEO and a Co-Founder of Lyten. “By using our unique Lyten 3D Graphene™ and proprietary lithium-sulfur cell chemistry, we will be able to deliver a three-fold increase in gravimetric energy density compared to conventional lithium-ion batteries.”

Additionally, Lyten’s cell technology is based on sustainable materials, requiring no cobalt, nickel or other rare minerals and provides the lowest carbon footprint of any battery. Through its unique Li-S batteries and proprietary, 3-dimensional graphene technology, Lyten is poised for additional improvements in the near future.

“Our state-of-the-art battery solution gives the DIU and U.S. Space Force a tool that will enable the use of smaller, lighter battery packs, better positioning them to use smaller spacecrafts, reduce the overall cost to orbit, and sustain Low Earth Orbit operations during eclipse,” said Shawn Black, President of Government, Aerospace & Defense at Lyten. “We look forward to successfully fulfilling the testing phase of this project and engaging with the DIU again in the future.”

With advanced energy and materials being a key part of the DIU’s initiative, Lyten was first awarded the contract in spring 2020 and since then has rapidly and successfully prototyped three different battery configurations, including pouch cells and cylindrical cells. The batteries will undergo a comprehensive level of testing as requested by the Space Systems Command, prior to production implementation.

“This project showcases the unique and extensive capabilities and advantages of our next generation material, which will be able to be applied to other industries outside of aerospace and defense,” Cook said.

Lyten is an advanced materials company developing a revolutionary lithium-sulfur battery technology for use in a variety of applications in automotive, aerospace, defense, and many other markets. Lyten 3D Graphene™ is the advanced material that enables lithium-sulfur batteries to improve the range and safety of electric vehicles, while also achieving a lower carbon footprint than other EV batteries. Lyten holds more than 260 issued or pending patents on covering technologies. Founded in 2015, the privately held company is based in San Jose, California. Visit www.lyten.com for more information.

About the Defense Innovation Unit

The Defense Innovation Unit (DIU) strengthens national security by accelerating the adoption of commercial technology throughout the military and growing the national security innovation base. DIU partners with organizations across the Department of Defense (DoD), from the services and components to combatant commands and defense agencies, to rapidly prototype and field advanced commercial solutions that address national security challenges. With offices in Silicon Valley, Boston, Austin, and the Pentagon, DIU connects its DoD partners with leading technology companies across the country.