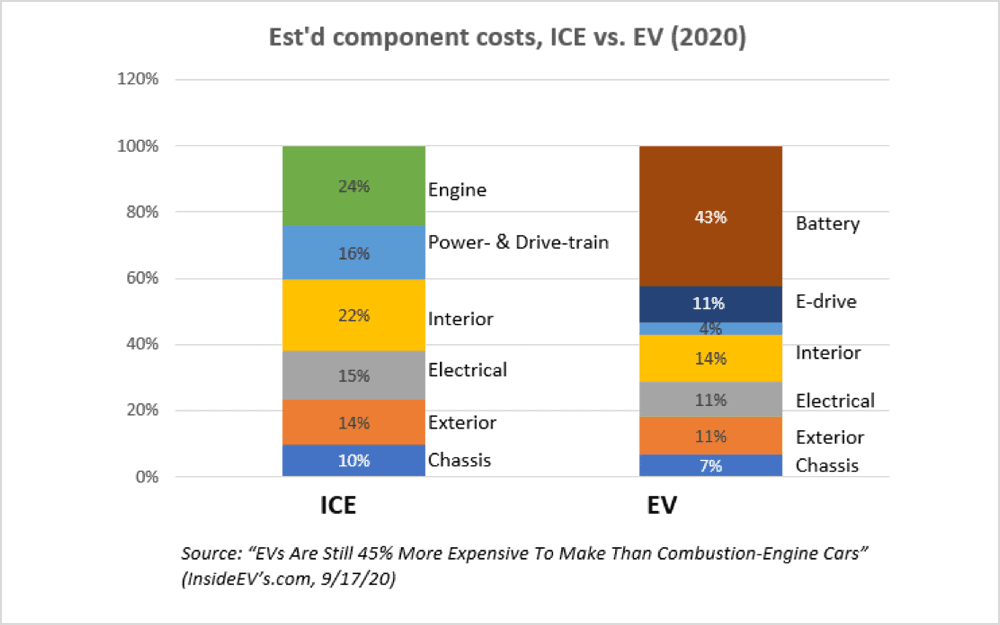 As many people involved in the development of electric vehicles and their batteries know, almost half the cost of a new EV comes from its battery pack. That’s huge, particularly when you consider that traditional internal combustion engines (ICE) represent only 20 – 30% of vehicle costs today (see chart below). Now imagine that you’re an ICE vehicle manufacturer, and the cost of core materials to make the engine block are skyrocketing by factors of 50% to over 400%. How would you handle pricing your vehicles? You’d raise price by a lot because you need to make money instead of lose money when you sell them. Fortunately, that’s never happened in the ICE vehicle business.

Unfortunately, that very thing IS happening right now in the EV manufacturing business, except it’s more extreme, because the huge cost increases are affecting the thing that makes up 40 to 50% of the overall cost (batteries), rather than just 20 – 30%.

While prices of all battery-related metals are up, the immediate disaster is in nickel.  Russia is the world’s third-largest producer of nickel, and it’s the largest exporter of refined nickel metal (what’s used in EV batteries). One of the economic fallouts of the Russia-Ukraine war has been a “nickel squeeze,” in which the spot price of nickel jumped astronomically. As of March 13, 2022, a Bloomberg article described this situation well:

“For most of the past decade, [nickel prices] traded between $10,000 and $20,000. Yet the day before [3/7/22], the market had started to unravel, with prices rising by a stunning 66% to $48,078. Now, the traders watched with a mixture of horror and grim fascination as the price went vertical. Already at an all-time high by 5:42 a.m., it lurched higher in stomach-churning leaps, soaring $30,000 in a matter of minutes. Just after 6 a.m., the price of nickel passed $100,000 a ton…  Nickel’s 250% price spike in little more than 24 hours plunged the industry into chaos, triggering billions of dollars in losses for traders who bet the wrong way and leading the London Metal Exchange (LME) to suspend trading for the first time in three decades.”

While the LME subsequently moved to cancel and unwind various trades that occurred during the squeeze, the longer-term effects will not be pretty. It puts an exclamation point on the price volatility that EV battery producers (and therefore EV manufacturers) are dealing with and will continue to deal with beyond this current world event.

So, what are EV manufacturers to do? They will consider doing the following:  1) raise prices, and 2) look for ways to switch to less expensive materials with less price volatility.

We’re already seeing EV manufacturers take step 1:  in early March, Rivian announced it is increasing prices by up to $20K on their R1T and R1S vehicles, citing increased costs. Customers are shocked – forking over $20K more than you were originally quoted is pretty tough for your average consumer to swallow. It will be interesting to see if / when other EV manufacturers follow suit.

What about step 2 – switching to less expensive materials?  Well, let’s look at costs and increases for these materials:

What does all this add up to if you’re producing traditional (or even advanced, solid-state) EV batteries? Obviously, higher costs, leading to higher prices. Since advanced cells are expected to have higher energy (Wh) per cell, the increase in cost per kWh won’t be as great, but it will still be substantial.

So getting back to step 2, what are the lower-cost alternatives? One that’s been getting press recently is Lithium Iron Phosphate (LFP) batteries, which use iron instead of Nickel, Manganese, and Cobalt (NMC) – they’re cheaper, but they also have lower energy density (i.e. fewer miles of driving range per KG of battery).

There is another alternative:  lithium-sulfur batteries. Sulfur’s price has also risen over the last 12 months, by 47%. HOWEVER, the cost of sulfur is dirt-cheap – currently $382/MT. To make the comparison, you can purchase ~200 tons of sulfur for what you pay to get 1 ton of cobalt. And Li-S cells have the potential to deliver even better energy density (Wh / kg) than solid state cells.

While I’ve made several points in this article, let me highlight the key point:  in a world where commodity prices for battery materials are going crazy, lithium-sulfur isn’t just a good idea, it’s an incredibly sensible idea. Admittedly, lithium-sulfur battery producers, like Lyten, will need to manage lithium costs, just like the rest of the battery producers. However, we DON’T need to manage or pass along the already expensive and rising costs related to nickel or cobalt. That’s a HUGE difference. And one which we believe will make lithium-sulfur batteries a very attractive alternative for EV manufacturers and their customers.